MecklenburgV_Rain_Final has been released!  This is the final iteration in the MecklenburgV Series.  I will still not release the source for now.  The source of the plugins can also be used as a framework in other RP mods,  I will not support them though.

The plugins are only needed for server operators.  Honestly, they arn’t even needed to even run the map.  However, to have all of the features that MecklenburgV_rain has to offer, these plugins are perfect.  The plugins have support for day/night mode, (set automatically/manually), the ability to turn the rain off (with some graphical bugs), the ability to turn the indoor lights and outdoor lights off, the ability to set the brightness of the outside lights, forcing the player to run with detail on, and the ability to toggle the maps fog. Server operators must check MecklenburgV_Rain_Final.cfg in the map directory for further instructions on the map’s Cvars.  The commands for the plugin are as follows:

amx_togglerain – toggles the rain on and off (incl. thunder sound)

amx_toggleindoorlights – toggles the indoor lights on and off 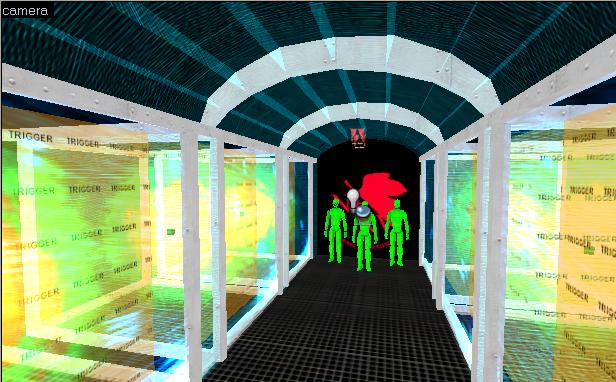 Oc_NervB is not in production anymore.

Nerv A was the first campaign of the NERV set of maps. It’s mostly likely the last considering what type of feedback I’ll get on it.

I wanted to personally thank the people on the Obsidian Conflict forums for bugging me to finish this map.

Description: NervA takes place during the sequence of events of the popular anime movie, The End of Evangelion. Players find themselves working as NERV personnel in Central Dogma and their mission is to defend NERV headquarters until the bitter end. The commander of your squad however, may have a different goal in mind.

Requirements: Obsidian Conflict and Counter Strike: Source, only found testing stable at 4 people.
This map only uses some materials and weapons from CSS, I’ve had testruns where people didn’t have CSS, and were perfectly able to play the map, while missing some sounds and having some purple circus.

Please be sure to give me feedback on the map, you can do it in this thread, via E-mail(Funjob@fjmaps.com) or post in the thread here OC forums.

It sure was a lot of fun working on this map, sorry I couldn’t get this thing out sooner.

I actually did this video quite a while ago, but I never had enough time to upload it. Since I’m out of ASU for the summer, enjoy!

I also made plugins that run under AMXMODX to enable an admin to manage the built in Day/Night mode as well as the Rain.  I’ll post pictures of the map during these modes later.   The plugins and source for them will be released along side with the map.  Anybody from that point could use the source to develop a day/night timer to work with a role-play mod.  The plugin can also recognize MecklenburgV_Snow and utilize it’s day/night mode.  Snow did not have an entity that controls the particles, so it would be impossible for the plugin I wrote to stop the snow in game.

I will probably release the new map and AMXX plugin sometime next week.

Well, take a gander at this!

Now I continue work on the rest of the exteriors in the map, when I get that done, my guess is first compile.  That won’t happen till I get some serious mapping done though, probably till December.

Just a little update on Rp_Nippon.

Pretty much worked on the beach and several other parts, you can really see parts where I reference animes in this. Is from Clannad.  I really loved the ambiance present in Clannad where it generates a small village feel, but it does it so with so much green and terrain.  Presenting this mix in the map will be costly and time consuming, but I think it really helps generate an ambiance. This is from AIR, another Key anime.  You can see the inspiration I had from this image is in how to present the transition between the ocean and the city.  It really has an intresting mix of old vs. new in the presentation of the ocean town in AIR.

So, what is RP_Nippon?
Rp_Nippon will be an exclusive map for the RP server we’ll be running.  Nippon is actually the codename for the project and will not be the final name when the map is done/in beta. Simply, the map is a role-play map with an extensive building list and large amount of features.

Where is this map?
RP_Nippon takes places in modern day Japan on the coast. The exact location is not based off of anything specifically, thus it could take shape in southern or northern japan.

Why Japan?
Well, I’ll admit that it does have a little to do from watching so much anime, but I was more or less inspired to make the designs based from the shows.  I could easily design buildings and interiors that are typically Japanese because I’ve watched so much.  In fact, most of the building designs and layouts are actually a mix of my own personal design, some building from an anime, and real Japanese architecture. Even though I justify my design off of just because of anime, I also wanted to bring the role-players where somewhere they havn’t been before to excite the role-play.  Having a cool environment topped with a different culture would make RP have more spice to it.  I believe having just another city, would be dull and boring.

But I can’t read Japanese! Won’t that ruin the experience of signs?
I’ll probably make two packs including Romanji names as well as Kanji.

What’s the map going to be like?
The map currently has 4 main areas:

Each of these areas will contain buildings and connect to the Main street district.  I plan to gradually rise buildings as you head from the beach area.  Giving both a small fishing town feeling next to a large corporate epicenter.  I also plan on having houses, but due to constraints, I might not be able to deliver.

Following are in these buildings:

Alright, cool, when will it be done?
It’s done when it’s done.  I go to school and attend engineering courses, so I map whenever I have time and inspiration.  I take it the map will be in beta in probably 4 months going at the current rate right now. I do have times where I work on the map a lot, and weeks where I don’t even touch the files, so it really varies.  You can always check my work in the status thread, or on my blog.

Can I help make the map?
Short answer, contact me over steam.  I am willing to form a team to make this map because it’s going to take a long time if I don’t.  But I expect fellow developers to be active and have past experience before even attempting to contact me on this map.  I already have an SVN up that I add to daily for just my maps and RP_Nippon is manifested according to the new SE2009 system, so having another person working on the project won’t be very difficult.  Also, don’t bother trying to join as a ‘tester.’

Can I test when you begin releasing alphas?
No, I have my own testing team already.

In my spare time, I pretty much mapped new parts in the upcoming OC_NervB.  To be honest, some of it is to be impressed about, but nothing really to pitch for an entire map.  I more or less stopped because I was a little discouraged from all of the work in my classes and lackluster design+vague ideas I had for the map.  I also came to a halt from the lack of enthusiasm I had for the map.

This was until I had a huge jump of enthusiasm to do a map I’ve always wanted to do, a Japanese styled RP Source map.

I’ll show more screenshots when they become available.  Also, I’ll post some screenshots of what I had done on Oc_NervB.  What might happen is that  might release NervA as is.  It has a very anti-climactic ending and bugs here and there, but who cares?  Better than sitting on my HD.